Moving a 3,000 year old sphinx: how air casters solved a 12.5 ton riddle and achieved the impossible 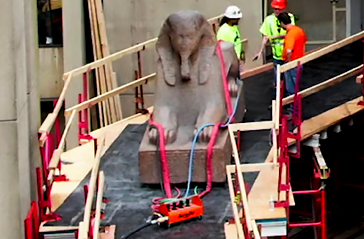 According to ancient myth, the Sphinx – a creature with the head of a human and the body of a lion – would stand guard at important and holy sites like royal tombs and religious temples. There, the ferocious creature would challenge trespassers with riddles before allowing them to pass.

Today, the Penn Museum of Archaeology at the University of Pennsylvania has its own Sphinx to guard its entrance. Discovered in 1913 by archaeologist W. M. Flinders Petrie in the Egyptian city of Memphis, this Sphinx depicts the Egyptian Pharaoh Ramses II. Since the University of Pennsylvania had partially financed Petrie’s expedition, he sent the Sphinx there after its discovery.

“The Sphinx is actually one of the most iconic objects that we own,” Julian Siggers, Williams Director of the Penn Museum, told CBS Philly.

But the majestic Sphinx certainly posed its own riddle to its caretakers recently.  The museum is undertaking a significant remodeling and reconstruction project “for extensive artifact conservation … [and] eventual renovations and re-envisioning for the new Ancient Egypt & Nubia Galleries.” But that means the Sphinx needed to move about 300 feet from its resting place inside the gallery to a new spot where it would greet visitors in the museum’s main entrance lobby.

What made the impossible possible and solved this difficult riddle? Air casters. Specifically, the AeroGo air caster system would allow the entire 12.5-ton object to float smoothly just above the floor.  Once he knew they needed to move the Sphinx, Brian Houghton, the museum’s building engineer, explored their options. “We reached out to rigging companies and they said they have this technology called an air dolly system,” he says. “Essentially, it’s like a glorified hoverboard, like from ‘Back to the Future.’”

But the Sphinx still faced its fair share of challenges.

The first issue is that the Sphinx isn’t just heavy, it’s also large (84 inches high, 46 inches wide, and 13 feet 6 inches long), and it needed to navigate low and narrow clearances and tight turns (including one 45-degree turn). Thankfully, the air caster system fits entirely beneath the Sphinx, without extending its bulk, and could rotate in-place. That allowed the bulky object to navigate cramped spaces with a minimum of modifications to its environment.  Floor capacity was another concern, not just for the move but for the future gallery as well. As a result, the team installed “post shores,” or jacks that reinforce and shore up the floor from underneath.  “The most physically challenging part was that first big incline, which is what we expected,” says Robert Thurlow, special projects manager. “The transition from flat to incline was a bit more difficult because of the seam, and the grade of the slope was tricky.” Workers built a 200-foot ramp layered with wood planks, plywood boards, and an overlay that would help the Sphinx navigate two separate inclines totaling 91 feet across the 300-foot odyssey.

Ultimately, the move went flawlessly. Guided by a team of about half a dozen people and carefully inching its way forward through the museum and along the ramp, the Sphinx made its way to its new home with nary a scratch. “It went as smoothly as we hoped,” said Thurlow.

View the video: Sphinx at Penn Museum is on the move-6.19